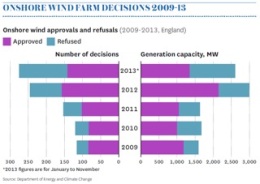 The statistics, published in a written Parliamentary answer, show that 141 onshore wind applications involving projects with a generation capacity greater than 0.01 megawatts (MW) were approved and 134 refused in 2013.The proportion of onshore wind applications rejected has increased each year for the past five years, jumping from 35.9 per cent in 2012 to 48.7 per cent in 2013, the figures reveal.

The statistics also show that the total capacity of the approved applications had fallen by 37 per cent in the last year, from 2,140MW in 2012 to 1,346MW in 2013. But the capacity of refused applications increased by more than 47 per cent over the same period, from 856MW to 1,262MW.

The figures also suggest a trend towards more, smaller onshore wind applications. The average generation capacity of the applications decided in England in 2013 was 9.5MW, down from 12.2MW in 2012 and 10.7MW in 2011, according to the data.

Philip Lewis, regional director Northern England for environmental advisers Atmos Consulting, said that approval rates may have fallen because “onshore wind development has been taking place for a number of years and it is becoming more challenging to identify sites which will be consented in England”.

Lewis added that the refusal rate may also have risen due to the increase in number of smaller applications. He said that such proposals “often do not have the same level of professional support”.

Paul Maile, a partner at law firm Eversheds, said that the increasing number of applications for smaller-sized schemes was not a surprise. He said: “The technology has advanced. Farmers see (wind power) as an income. I suspect there are a number of local authorities supporting smallto medium-sized schemes to demonstrate support for renewables. This makes it harder to approve bigger commercial developments in the same area.”

A study published last November by trade body Renewable UK found that the average generation capacity of UK onshore wind farms that are gaining planning permission is declining and more schemes are being approved at appeal. In its annual report on the state of the industry, the body said that the average size of a project consented in 2012/13 was 11MW, down from 14MW in 2011/12.